The main objective of the follwing projects is to give students experience in working with advanced robotics tehcnology. Our group is active in several R&D projects involving human-robot collaboration, intuitive teleoperation of robots, and autonomous navigation of unmanned mobile platforms. Our main software platforms are Robot Operating System (ROS) for developing software for advanced robot systems and Gazebo for running realistic robotic simulations.

The following is not an exhaustive list of all available thesis/research topics.

Development of demonstrative and promotional applications for KUKA youBot

The goal of this project is to develop promotional use cases for KUKA youBot, that demonstrate the capabilities of modern robotics and inspire people to get involved with it. The list of possible robotic demos include: 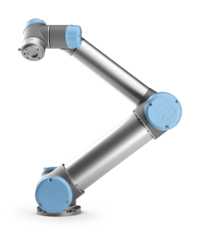 Development of demonstrative and promotional applications for Universal Robots UR5

Development of demonstrative and promotional applications for Clearpath Jackal

The project involves many potential theses topic on open-source robot platform ROBOTONT. The nature of the thesis can be software development to improve the platform's capabilites, simulation of specific scenarios, and/or demonstration of ROBOTONT in real-life setting. A more detailed thesis topic will be outlined during in-person meeting

Accurate navigation of self-driving unmanned robotic platforms requires identification of traversable terrain. A combined analysis of point-cloud data with RGB information of the robot's environment can help autonomous systems make correct decisions. The goal of this work is to develop algorithms for terrain classification.

The ocjective of this thesis is to integrate robots available at the Institute of Technology in a single Gazebo simulation world to enable further software development and educational activities using these robots. The specific tasks within this thesis will include testing existing Gazebo packages of off-the-shelf robots and creating/improving simulation capabilities for other robots.

The idea is to create a robotic demonstration where a mobile robot is using Kinect or similar depth-camera for identifying a person and then starts following that person. The project will be implemented using Robot Operating System (ROS) on either KUKA youbot or similar mobile robot platform.

This project involves creating ROS libraries for using either a Leap Motion Controller or an RGB-D camera to detect most common human hand signals (e.g., thumbs up, thumbs down, all clear, pointing into distance, inviting).

Intelligent status and error handling for an intuitive telerobotic system.

True human-robot collaboration means that the robot must understand the actions, intention, and state of its human partner. This work invovlves using cameras and other human sensors for digitally representing and modelling humans. There are multiple stages for modeling: a) physical models of human kinematics and dynamics; b) higher level-models for recognizing human intent. 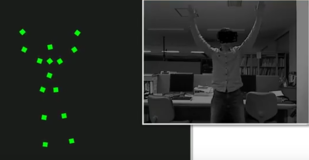 Creating a ROS package that enables robots to speak in Estonian. The basis of the work is the existing Estonian language speech synthesizer that needs to be integrated with ROS sound_play package or a stand-alone ROS wrapper package.

Detection of hardware and software resources for smart integration of robots

Vast majority of today’s robotic applications rely on hard-coded device and algorithm usage. This project focuses on developing a Resource Snooper software, that can detect addition or removal of resources for the benefit of dynamic reconfiguration of robotic systems. This project is developed as a subsystem of TeMoto.

Sonification of feedback during teleoperation of robots

Humans are used to receiving auditory feedback in their everyday lives. It helps us make decision and be aware of potential dangers. Telerobotic interfaces can deploy the same idea to improve the Situational Awareness and robotic task efficiency. The thesis project involves a study about different sonification solutions and implementation of it in a telerobotic application using ROS.

The goal for this project is to develop ROS drivers for LEHF32K2-64 gripper. The work is concluded by demonstrating the functionalities of the gripper via pick-and-place task.

The goal of this project is to integrate continuous control of industrial robot manipulator with a gestural telerobotics interface. The recommended tools for this thesis project are Leap Motion Controller or a standard web camera, Universal Robot UR5 manipulator, and ROS.

Analysing the technical characteristics of 3D lidar.. Desinging and constructing the mount for Ouster OS-1 lidar and validating its applicability for indoor and outdoor scenarios.

The thesis is suitable for both, master and bachelor levels, as the associated code can be scaled up to generic "user-friendly control" package.

A very common issue with robotics in real world environments is that the network coverage is highly dependent on the environment. This makes the communication between the robot-to-base-station or robot-to-robot unreliable, potentially compromising the whole mission. This thesis focuses on implementing a peer-to-peer based network system on mobile robot platforms, where the platforms extend the network coverage between, e.g., an operator and a Worker robot. The work will be demonstrated in a real world setting, where common networking strategies for teleoperation (tethered or single router based) do not work.

The task is to create a telerobot control interface where video feed from the remote site and/or a mixed-reality scene is augmented with visual cues to provoke caution in human operator.

The thesis making the end-effector of a mobile manipulator robot follow a continuous path. Such behaviour is of great interest in manufacturing domains such as industrial welding, sandblasting, coating, and depainting. The thesis work involves using Mobile Industrial Robot MiR and Universal Robot UR5 in collaboration.

As robots and autonomous machines start sharing the same space a humans, their actions need to be understood by the people occupying the same space. For instance, a human worker needs to understand what the robot partner is planning next or a pedestrian needs to clearly comprehend the behaviour of a driverless vehicle. To reduce the ambiguity, the robot needs mechanisms to convey its intent (whatever it is going to do next). The aim of the thesis is to outline existing methods for machines to convey their intent and develop a unified model interface for expressing that intent.

When human needs to pass an object to a robot manipulator, the robot must understand where in 3D space the object handover occurs and then plan an appropriate motion. Human gaze can be used as the input for predicting which object to track. This thesis activities involve camera-based eye tracking and safe motion-planning.

Setting up a system that allows booking time on a physical but networked remote robot to validate and test robot software. The thesis involves system administration and front-end development.