Producing useful new materials would be easier if we could calculate their properties before actually making them. A complete description from first principles is impossibly complex, but computer-aided materials design is enabling progress in linking the electronic, atomistic, microstructural and continuum levels. But not only new materials - computer-aided materials design involves also the analysis and exploring of the properties of already existing materials. In computer calculations, it is often common that complexity of the system must be reduced or simpler subsystems created. These must be simpler enough to by viable models, so that analytical and/or numerical methods can be used to analyse the system and its properties. Care must be taken to ensure that the models are as realistic as possible and that their properties prior to the simulations have physical and chemical meaning. For example, the predictions of the computer simulations can only be as reliable as the interatomic potentials used since the gradient of the potential determines the interatomic forces that enter Newton's laws of motion. An unphysical interatomic potential used as a input will lead to unphysical behaviour as output in accordance with GIGO principle of computing, namely Garbage In Garbage Out.

A fluoropolymer is a polymer that contains atoms of fluorine. They were characterised by an unusual resistance to solvents, acids, and bases. Fluoropolymers were discovered serendipitously in 1938 by Dr. Roy J. Plunkett. He was working on freon and accidentally polymerised tetrafluoroethylene. The result was polytertafluoroethylene (PTFE) - Teflon®. It turned out to be the most slippery material known to the man and inert to virtually all chemicals.

Nafion® is DuPont's trademark of a sulfonated tetrafluoroethylene polymer modified from Teflon®. It is the first member of synthetic polymers with ionic properties which are latter called ionomers. Nafion's ionic properties were created by introducing sulfonic acid groups into the bulk polymer matrix of Teflon. Nafion® is usually used to make ion-exchange membrane for applications such as Proton Exchange (or Polymer Electrolyte) Membrane Fuel Cells. Its ability to conduct hydrogen ions (protons) but not water or electrons are what qualifies if for this task. 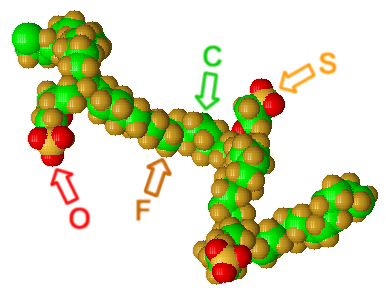 Figure: a segment of the Nafion® chain

Nafion belongs to the wide class of solid superacids catalysts, in that it exhibits acid strength greater than that of 100% H2SO4. It has hydrophobic (-CF2-CF2-) and hydrophilic (-SO3H) regions in its polymeric structure, and its supeacidity is attributed to the electron-withdrawing effect of the perfluorocarbon chain acting on the sulfonic acid group. Nafion is able to catalyze various reactions, such as alkylation, disproportionation, and esterification.

The Aim of the Project

Molecular Dynamics (MD) simulations give us a chance to have close insights into Nafion's dynamics and local structure on molecular level. We can study the details of proton-conductivity and find out the mechanisms what can possibly improve this process. We are interested in following research problems: